Crossing the Lines with Translink and Replay Theatre Company 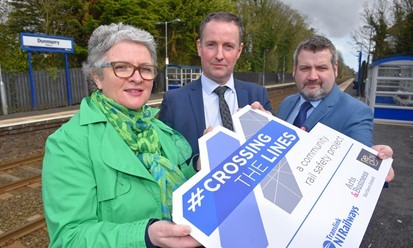 A series of creative workshops for years 9,10 and 11 took place at a number of schools last year, reaching around 600 young people. Students gave their views and suggestions on safe train travel as well as trespass and anti-social behaviour. This feedback has formed the basis for Replay Theatre Company’s #crossingthelines theatre production, which is visiting schools next week.

Richard Knox, Translink’s Head of Rail Service Operations said: “Trains remain one of the safest ways to travel and we have been promoting this message during engagement with youth audiences. Replay Theatre Company received detailed insight from young people involved in last years’ workshops. Young people realise that dangers and potential threats come from misuse of trains and railway property”.

Richard continued: “The #crossingthelines initiative and production has allowed us to work with students in a positive, creative and engaging way. Working with young people to influence other youth audiences and passengers makes our campaign even more credible and will help us to encourage safe and responsible behaviour at stations and on board our trains and to maintain a safe and comfortable environment for all our customers”.

Brian Mullan, CEO of Replay Theatre Company added: “Replay is passionate about bringing quality theatre experiences to young people. This partnership with Translink has allowed us to produce a highly entertaining piece of theatre, involving young people in the creative development process, while using the arts to explore issues around rail safety with young people who use trains on their commute.  We are delighted to be bringing the resulting new play #crossingthelines written by Stephen Beggs and directed by Matt Faris to schools across Northern Ireland. We also welcome continued value that Translink places on the arts as a vehicle to communicate its messages to the local community.”

Mary Nagele, CEO Arts & Business NI said: “We are delighted to support the innovative #crossingthelines project where we connected our arts member Replay Theatre Company with our business member Translink to deliver an effective schools engagement project where local school children explored safety around rail travel and associated issues including trespass and anti-social behaviour. It is really great to see the output from the schools’ workshops culminate in the bespoke in-school theatre production now touring”.